You are here: Home / Archives for Beliefs in Society / Religion in Global Context 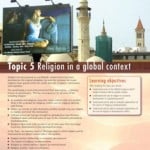 By 2006, Pentecostal churches were the fastest-growing Christian group in the UK, with almost 1 million members (compared with over 20 million in the USA). The movement began among the poor and disadvantaged in the USA and has now spread to the poor of South America and Africa. Worship is very informal and participants may show their emotions by clapping, shouting, dancing and entering … END_OF_DOCUMENT_TOKEN_TO_BE_REPLACED 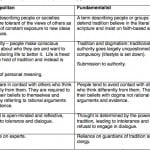 In pairs, discuss the elements of cosmopolitanism suggested by Giddens, summarised in the table below. Suggest examples from modern Britain to illustrate all of the points listed in the table. Then compare your examples with those produced by your fellow students. Cosmopolitan Fundamentalist A term describing people or societies which are tolerant of the views of others as … END_OF_DOCUMENT_TOKEN_TO_BE_REPLACED

Jeff Haynes (1998) uses the term ‘political religion’ to describe religions that engage with socio-political issues and achieve change. Religions vary in the extent to which they engage with socio-political issues. Examples in the chapter would include the Catholic Church supporting democratic movements in Latin America and Eastern Europe Using newspapers and items from TV news, collect … END_OF_DOCUMENT_TOKEN_TO_BE_REPLACED