You are here: Home / Archives for Crime and Deviance / Ethnicity 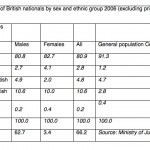 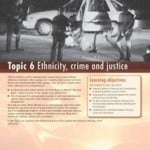 Read the story of Stephen Lawrence at the BBC website Use the story links on that site to find out why the Metropolitan Police were accused of incompetence. Who was the leader of the enquiry set up by the Home Secretary, and what did he find? What did the Home Secretary promise to do? The article calls Stephen Lawrence ‘Britain’s Rodney King’. See the photo and caption on page 110 … END_OF_DOCUMENT_TOKEN_TO_BE_REPLACED

Question 1: Read carefully through the section on ethnic differences in the criminal justice system (pages 112-113), and find at least four reasons why ‘blacks are five times more likely to be in prison than whites’. Question 2: What is a ‘moral panic’? Suggest two other examples you have learned about. … END_OF_DOCUMENT_TOKEN_TO_BE_REPLACED

(b) 7 times. Black males are less likely than other ethnic groups to report offences already known to the police; self-report studies do not usually ask about more serious offences; self-report studies do not include prisoners, among whom blacks are over-represented. All these factors affect the representativeness of the results. (a) Utilitarian crime is produced in delinquent … END_OF_DOCUMENT_TOKEN_TO_BE_REPLACED

FREE ONLINE ACCESS TO OUR TEXTBOOKS DURING THE LOCKDOWN!

We are making our textbooks free for your students to access online until 31st July.
All you have to do is go to [INSERT THE URL] and register.
Your students will then be able to download copies of the following eBooks: