You are here: Home / Archives for Sociological Methods / Other Research 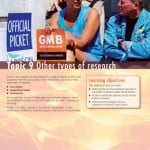 ‘One main case study... constitutes the basis of my research’ Paul Willis ‘Learning to Labour’ Willis research (1977) was a case study that focused on the experience of schooling of twelve working class boys known as the ‘lads’. Read the section on Willis’ research and findings on page 146-147 and answer the following questions: What insights did the study provide on the social … END_OF_DOCUMENT_TOKEN_TO_BE_REPLACED

In studying the movement known as Scientology, Roy Wallis had problems gaining access to members of the movement, who were generally unwilling to co-operate. He eventually contacted a former member who had written a book, who put him in touch with a number of other former members. From these interviews he gained documents including a mailing list. The mailing list was out of date but it did … END_OF_DOCUMENT_TOKEN_TO_BE_REPLACED

False Burn; Lane and Roberts; Weber; Townsend; The Kendal Project. True False Douglas; The national Child Development Study; Lacey; Gauntlett and Hill; Parker. Losing some of the original sample during the course of the study. They can trace developments over a period of time; they allow a detailed picture to be built up; by comparing groups over … END_OF_DOCUMENT_TOKEN_TO_BE_REPLACED